I know that I can write. I know that I would much rather make a living as a published author than remain at my current job…it’s not a bad job but to go to work every single day to a job that does not in any way feed your soul just sucks the life out of you. I know that if they didn’t have pretty decent insurance and/or I didn’t have so many health issues which require a lot of medications I would have left quite a while back. That’s not what should keep you at your job. I know that I’ve already had my non-writing dream job at a company called BigFatWow! where I was passionate about my work and I was told regularly just how much they appreciated me. They were awesome to work for but startups are volatile in that they can implode in a heartbeat if your investor pulls out or another company acquires it. BFW! had both happen. I was 1 of the few people that the new company kept. I had worked for 8.Communications for about a year when I was in a horrific head-on collision that should have actually killed me. I had a fractured pelvis, broken clavicle and broken ribs and considered myself fortunate. I was in the hospital for 2+ weeks, in a wheelchair for almost 3 months, in physical therapy for 2 months and was finally released to drive almost 4 months after the accident. I went back to work only to find them cleaning out our offices because our investor pulled out. I began my current job about 3 months later. It will be 16 years ago next month…just a few days before my birthday.  I know that I was being watched over on that March evening. I know that a lot of people stopped to try to help me and to give the police their statements about how the man in the pickup truck that hit me was speeding (the police said he was going 65 in a 45mph zone) and that he was passing illegally and when moved to the far right lane, he followed me over. I know he walked away from the accident. I know that a complete stranger named Mohammed talked to me through my side window that would only roll down a inch or so and he kept me calm. He also called my husband for me and told him about the accident. I know that I wish that I could find him and thank him face to face rather than from the inside of a wrecked car that I was trapped in. I know that to this day, I don’t remember anything between the time I saw the truck heading toward me and when I looked up after the impact. I know that the sound of the door being pulled off was one of the loudest things I’ve ever heard. I know the firemen and paramedics were amazed that I was alive, hadn’t hit my head, and was conscious. I know what a siren sounds like from inside the ambulance. I know what being stuck in a wheelchair feels like. I know that I never want to feel like an invalid again. I know that I don’t like having to depend upon others for way too much from personal hygiene to transportation to having to have a baby monitor in the bathroom just in case I didn’t transfer successfully from the wheelchair in and out of the shower or on/off the commode. I know what it’s like to be told by my brother that hair looked like it belonged on a calico cat because I couldn’t dye it so I had varying shades of auburn growing out with a little brown and, to top it off, white roots. I know what it’s like going through and being confirmed during Easter Vigil while in my wheelchair with calico cat hair. I know what freedom felt like on the day I was released from the wheelchair. I know so many things but those are the ones that came to mind tonight. That’s probably because I was free associating and that’s where it took me. The photos are of my car at the impound lot. Something like that changes your life and I was never quite the same after it happened. But one positive thing was me knowing that I was blessed otherwise I wouldn’t have survived. Thanks for taking this stroll down memory lane with me tonight. 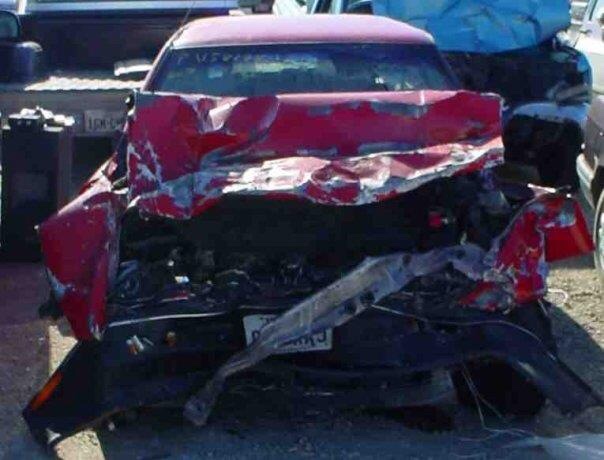 I am a writer that lives in the Dallas-Ft. Worth Metroplex with my husband, 3 dogs, and 6 cats. I am currently working on my novel, Rapture, as well as writing poetry and some short non-fiction. I am honestly writing this blog to feel more connected with other creative people.
View all posts by Donna Heilman →
This entry was posted in Inspiration. Bookmark the permalink.

2 Responses to Day 145: Some Things That I Know